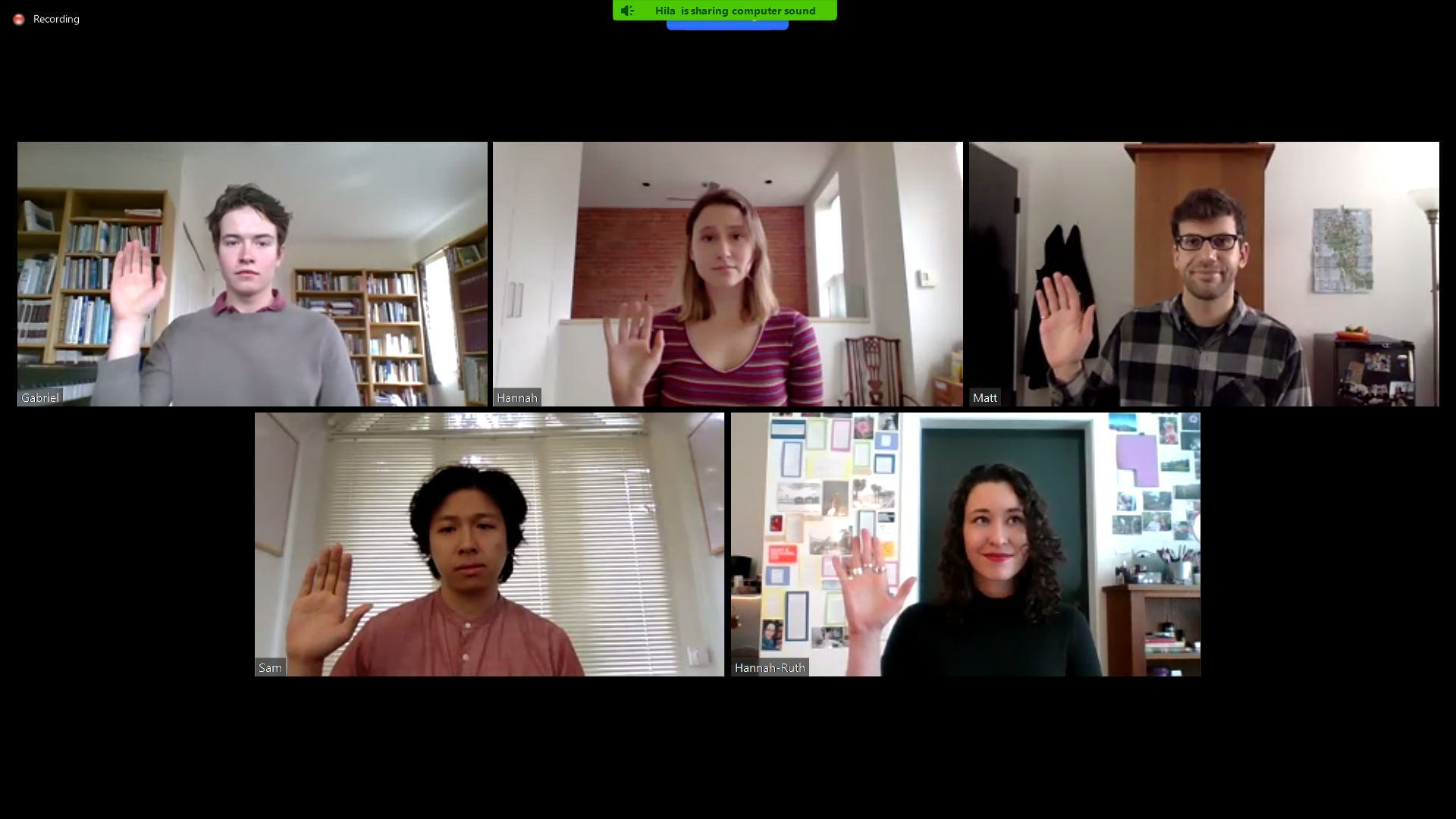 Every year around spring the Green College drama group, the “GC Players”, perform for college and other members of the community. This year the performance encountered some unexpected obstacles. The outbreak of Coronavirus and the ensuing global pandemic meant that in-person gatherings had to be cancelled, a seemingly insurmountable problem for something that requires an audience. 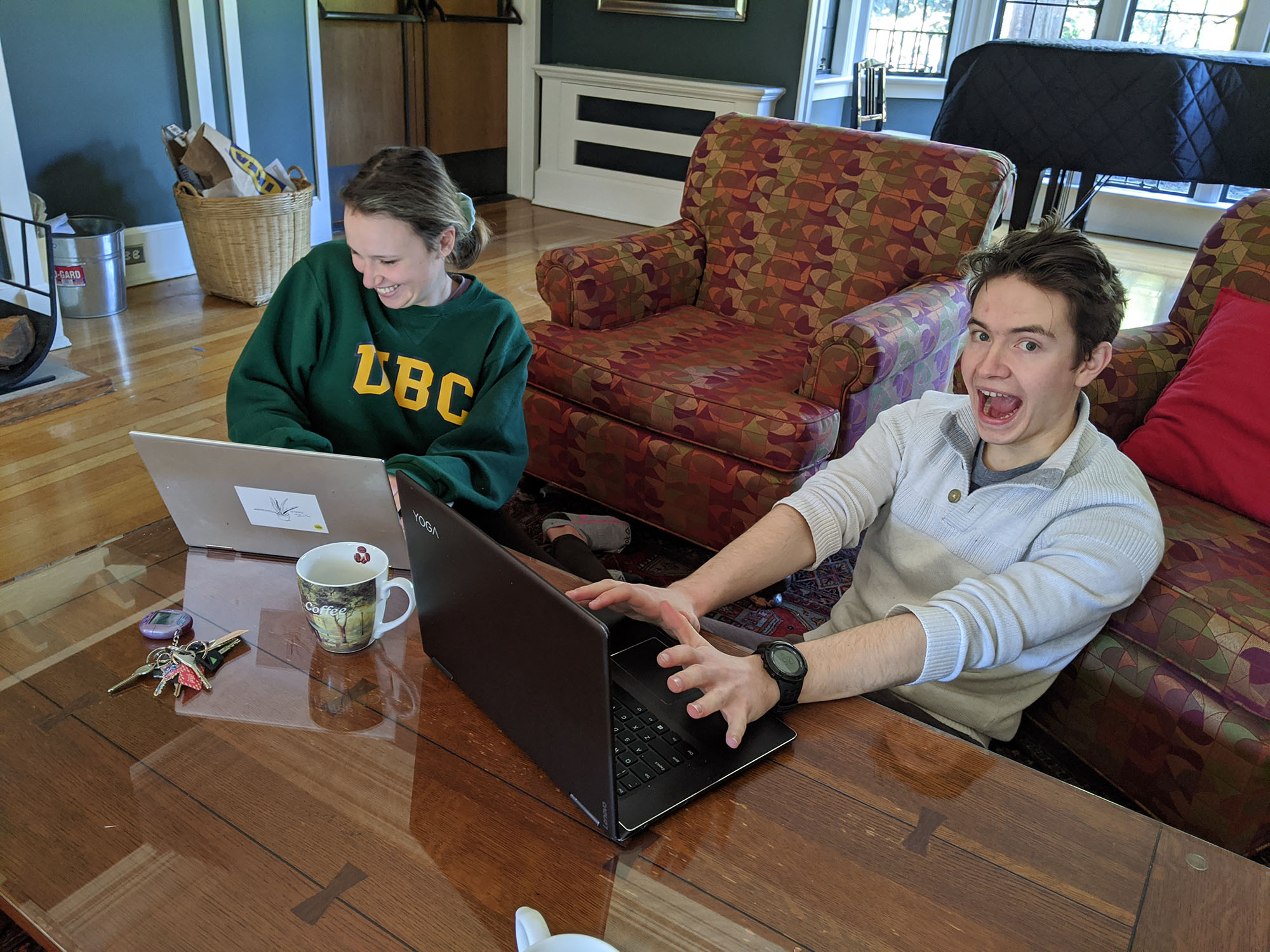 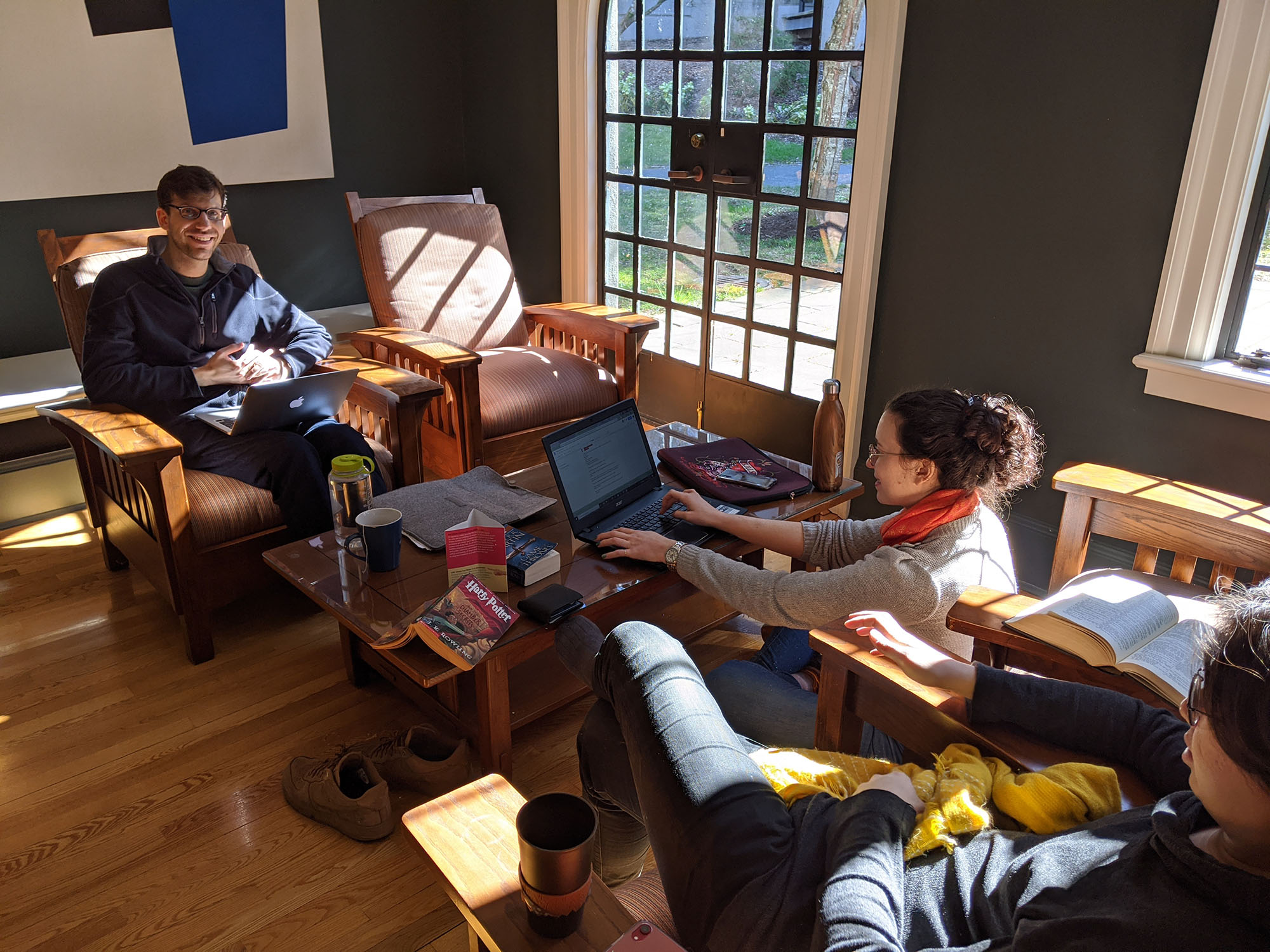 [2/3: Pre-pandemic preparation: back before the outbreak, when the Players could rehearse in the same room]

However, thanks to the fearless determination of the Players’ leader, Hila Graff, who wrote and directed this year’s play, the show did in fact go on, and without breaking any social distancing rules. All thanks to a willingness from Hila and the Players, Sam, Hannah-Ruth, Hannah B, Matt D, and Gabriel L, to adapt and experiment, with a little help from modern technology. 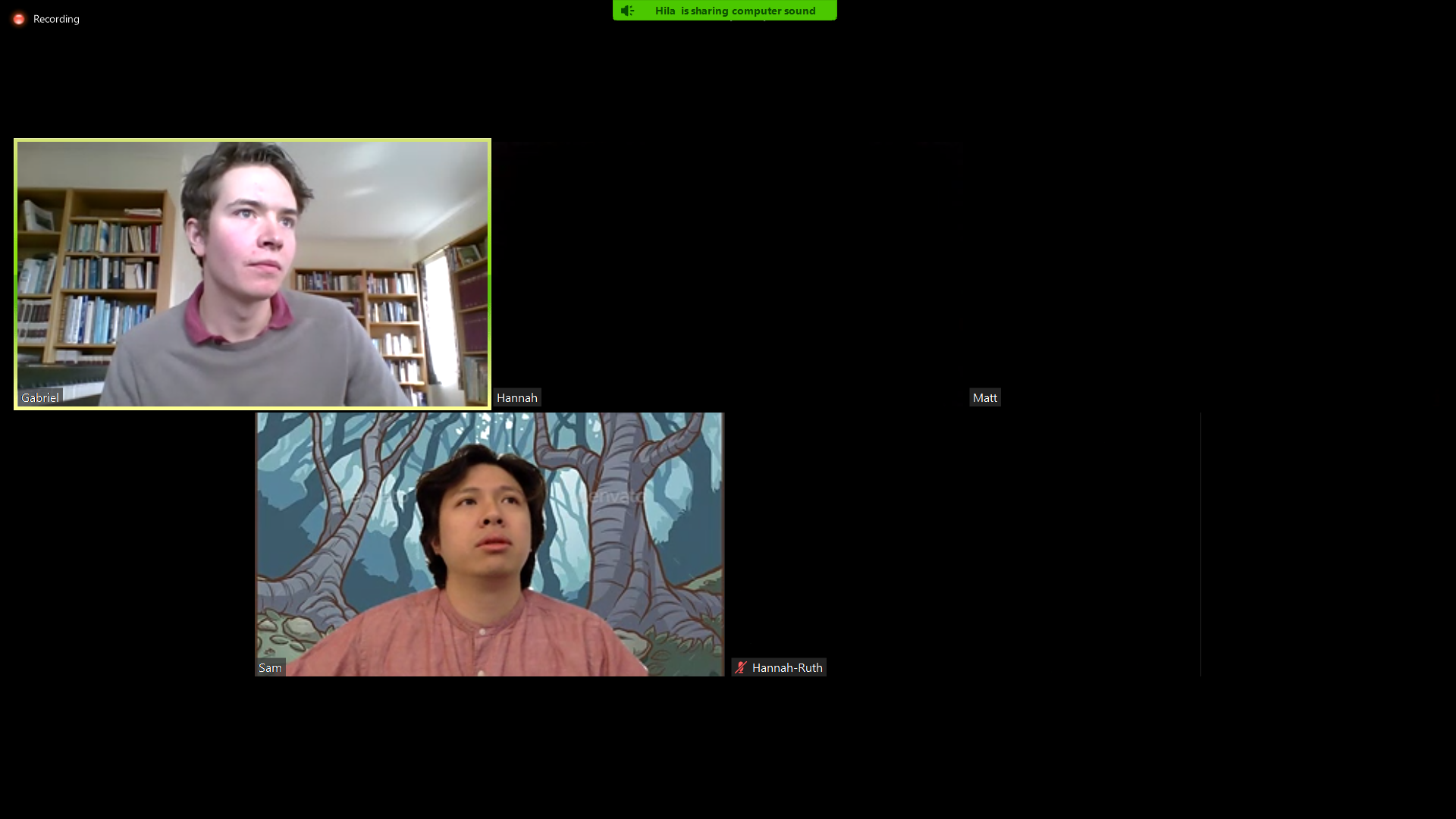 [4: Gabriel and Sam perform the short story “Into the Woods”, where they teach a bear the benefits of social distancing]

Performed on the video conferencing site, Zoom, the play kept some of the original ideas and stories and added and adapted others to work with the new, and now virtual, stage. The play, titled “Hold My Hand”, was an exploration of friendship inspired by the stories shared by Greenies. The title, though somewhat ironic in a time of strict social-distancing, was all the more poignant because of this. But don’t worry, all the actors were seen washing their hands at the start of the show.

Rather than trying to ignore the new, virtual medium, Hila and the other Players embraced Zoom and acknowledged it as the stage, engaging with it and using it as a new opportunity for theatrical experiment rather than a last resort option. This included ‘looking’ at each other in the frames to the left, right, above or below, and even, humorously, ‘passing’ granola bars and water bottles between screens. 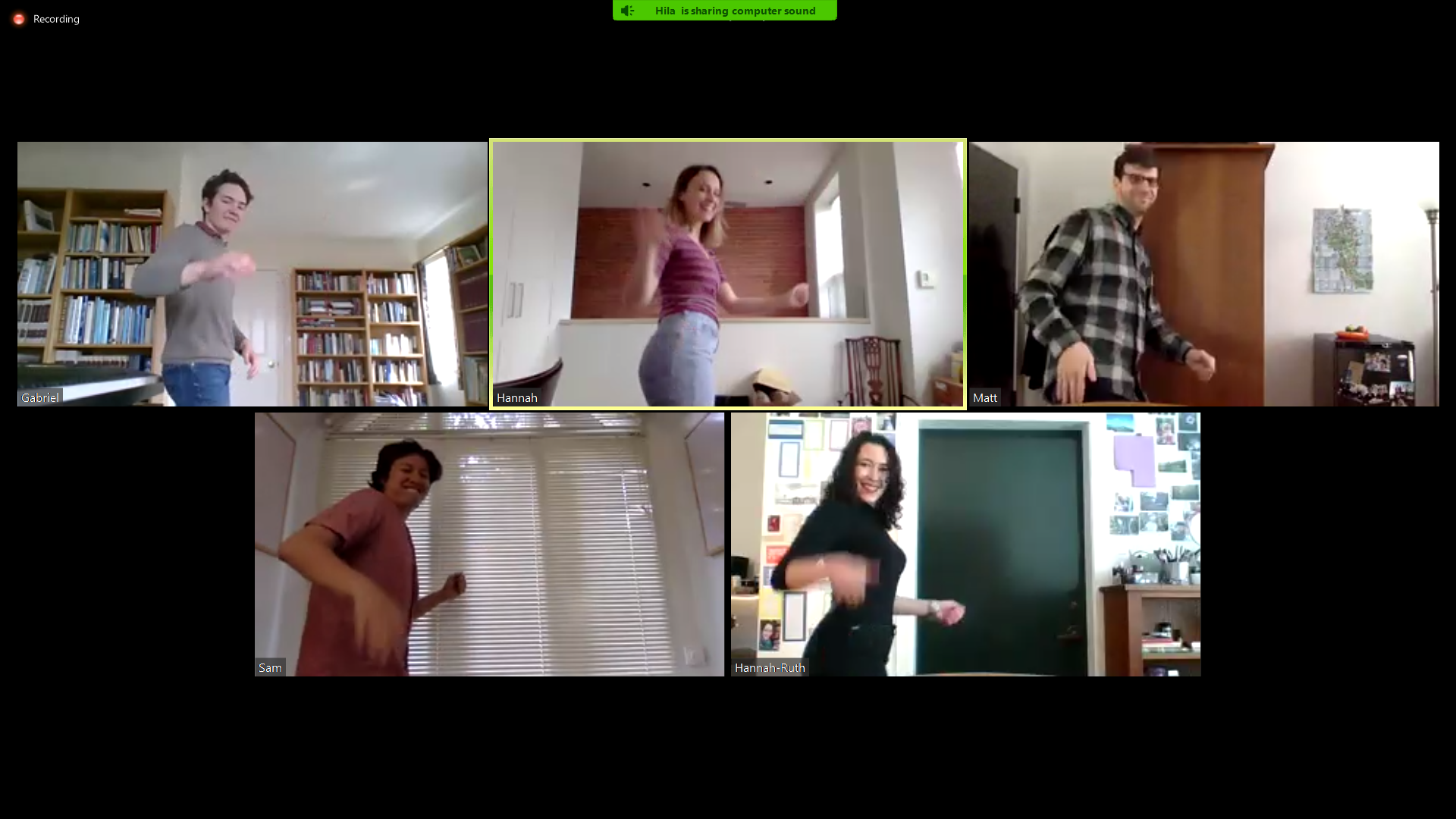 [5: The cast performs a synchronised dance on Zoom]

Not only did the alternative medium offer a chance for theatrical creativity, but it also brought with it other opportunities such as international involvement. The play itself was performed from locations across the country, including BC and Ontario, but it was also watched by an audience whose members signed in from across the globe. People from Canada, the USA, South Africa, the UK, and Israel were able to access this brilliantly crafted depiction of friendship. The performance was funny, moving, exciting, whimsical, and truly a remarkable feat by Hila and the cast.