On the Patchworks Podcast and Dreaming at Green College

Why did you and your fellow organizers Patara McKeen and Jane Willsie decided to launch a College podcast?

So, it's been a couple of years now, and it's been shrouded in the mythology of how it has all come into being but if I recall correctly, Mark [Vessey] approached Patara and me in the fall of 2020 with a proposal: to re-imagine public engagement during the pandemic (with a lot of in-person programming being suspended and not possible). After some conversation, Patara and I landed on the idea of a podcast. I, like many people during the ongoing pandemic, had fallen into listening to podcasts. So, it made sense for the moment. And Jane joined us a little bit later. We are both so deeply, deeply indebted to Jane. Jane helped provide the structure, and kept this moving forward.

And how did you land on the goal of the podcast, “to amplify stories if IBPoC resistance, organizing and dreaming by emerging and established Vancouver-based and international scholars, activists and community organizers”?

Both Patara and I wanted to contribute to programming that centred on the experiences of racialized folks. Given that, you know, either sometimes in the programming that is being offered by the College or more broadly, at UBC, that sort of diversity is not always consistently offered. So, we thought this would be a good opportunity to change that a bit, particularly given the College's willingness to support us. And we wanted to not only focus on racialized voices, or on established, racialized academics—we wanted to meet with community members and bring together community-based activists who've done the work. We wanted people who were established, and we wanted people who were emerging, and so we pulled together a sort of mission statement, which is to feature a broad range of voices: the voices of Indigenous people, people of colour, and people who are young and old, established and emerging in terms of the work that they do in and for various communities.

It sounds like this is something of an intervention, then, to the kinds of voices we normally hear in academia and the University at large.

Your language of intervention is a very apt description. And well, not often does an institution give you the resources to intervene on the landscape of its programming, so we really ran with it. And I know, for myself, I thought it was also really important to start with a young person, and not just any young person but Kalani Reyes, who is an incredible activist. I don't know how I managed to convince Patara of this, because you know, usually the first episode of a new podcast features someone who is institutionally entrenched. But it was really important to me to have a young, activist voice heard first.

I wonder if we can discuss Kalani Reyes a bit more, because she is also a podcaster with her own established series. Did she also inspire the podcast format for Patchworks?

Interviewing Kalani was a privilege and I just want to note that she is the most consistent supporter of Patchworks; every time I post something on Twitter, she's liking it, she's re-tweeting it. And it was a masterclass listening to her podcast, Deep Pacific, and hearing the different ways that she approached and featured voices from across the Pacific, and then interviewing her in turn. There is something quite unique to interview and also simultaneously be interviewed by the podcaster, as happened with Kalani. I often make the joke that while I was producing the episode, she was producing me. Oh, to be produced while producing! And you know, I initially I wondered: am I not being enough of a host? Like, am I giving her too much space? But then, I stepped back and relaxed into [what was] an incredible experience. I think it takes a very special individual, who has an incredible skillset and vision, to build that trust to make you feel comfortable stepping back on your own podcast ... and these are all the things that Kalani has. So when she was like, “well, Rodney, tell me about your experiences, too” I was excited to be invited to participate in conversation with her.

She was a great choice for the first interview for the series; it was great that we got to know you a bit as well in that episode. Did she also inspire the title “Patchworks,” or did that come from elsewhere? And that great image that was created for the podcast—of a person ensconced in different patterned pieces of fabric, almost like in a cocoon. What is being evoked there? 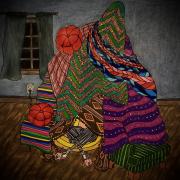 The image was inspired by a very real experience! It was created by a friend of Jane’s, and it is based on my first interview, which of course was with Kalani.

So, I am very fortunate and grateful to be allotted a studio at Green College, but unfortunately it comes with a very high roof. And that kind of space is a bit of a nightmare for recording.

As I mentioned earlier, Kalani was producing me as I was producing her, and she gave me a lot of tips on how to record in a space like this. So, part of that looked like taking the chairs and furniture that I had available to me, and the numerous blankets that I have, and building a little blanket fort, in order to be able to dampen the sound.

I’m very large, and a three-hour interview partially sitting and partially lying on the floor in a blanket fort was incredibly uncomfortable!

You paint a picture Rodney.

It was an incredible conversation! But I was slightly uncomfortable, physically speaking. That is what is captured in the cover art for Patchworks, although there was some artistic license taken with the bunny slippers.

And I guess that takes us to the title. The title has a sort of life of its own. I know what it means to me, it comes from a poem by Melvin Dixon, who was a gay black poet, author and academic who died of AIDS related illnesses in the 1990s. He wrote a poem called “Aunt Ida Pieces a Quilt,” and it features a quotation by the Reverend Jesse Jackson, who says, “You are right, but your patch isn't big enough.” And Jackson is addressing various groups using this phrase, like farmers: you seek fair prices, and you are right, but you cannot stand alone, your patch is not big enough. And workers: you fight for fair wages, you are right, but your patch of labour is not big enough. And women: you seek comparable worth and pay equity, you are right, but your patch is not big enough. And so this idea of patchworks mirrors this idea of putting together a quilt of different, distinct lived experiences; how you can represent different racialized, Indigenous and Black experiences, while also looking at how these things can draw us together. It raises questions around what community-building looks like, and what we dream about when we do the work that we do. Each episode kind of acts like individual patches, and also like individual pieces of a larger fabric, like a quilt.

What can we expect next from Patchworks?

I am transitioning from the College, and Patara and Jane have also both since finished their degrees. We have a few new interviewers and hosts that may be taking over for us, and there are still five episodes in various stages of production that should be posted in the coming months. But you know, all things come to an end at some point as well. And I'm not interested in making something continue when it has met it's time. And I think there is there's an art to, you know, making things sustainable and ongoing, but there's also an art to knowing when to step away. So really, who knows? It was a dream, you know, us starting this podcast to begin with. Who in early 2020 would have thought that I'd be doing a podcast?

Society Member Rodney Stehr is a former Resident Member of Green College having completed his MSc in Interdisciplinary Studies in the summer of 2022. His master's research focused on the mental health experiences of queer youth navigating COVID-19.